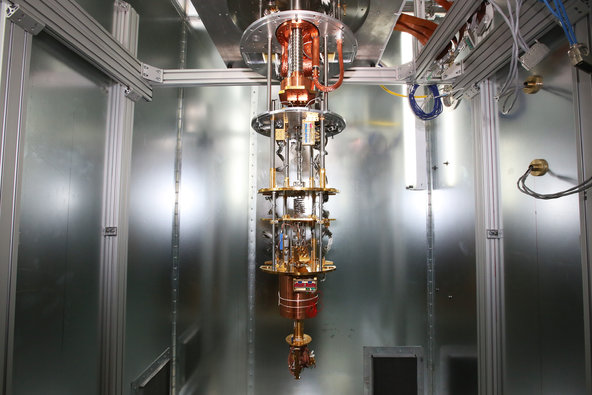 Kim Stallknecht for The New York TimesA quantum computer without its protective thermal canister. The kind of computing D-Wave pursues seeks to define a problem’s answer in terms of an optimal outcome among a near-infinitude of possibilities.

By QUENTIN HARDY
In the fight to prove it really has developed a quantum computer,D-Wave Systems may have won a big round.

In a paper published on arXiv.org, researchers from University College London, and the University of Southern Californiacompared the data obtained from a D-Wave computer with three possible explanations from classical physics, and one from the type of quantum computing that D-Wave is pursuing. None of the classical outcomes fit the data, while the quantum outcome fit the data from the machine.

If proved out, the results will be a significant boost for D-Wave, a 13-year-old company that has won contracts with Lockheed Martinand a joint research endeavor by Google and the National Aeronautics and Space Administration, as well as significant skepticism from many academic quantum physicists. Taking an applied approach sharply different from that previously tried by most academics, D-Wave has reported computing gains vastly better than anyone else.

Scientists at D-Wave, which is based in British Columbia, were quick to cheer the results.

“This is analogous with the transition from classical physics to relativity,” said Colin Williams, a quantum physicist who serves as D-Wave’s director of business development. “This slays the objections.”

Not entirely. “What I think is going on here is that they didn’t model the ‘noise’ correctly,” said Umesh Vazirani, a professor of computer science at the University of California, Berkeley. He was referring to possible distortions to the data caused by a technique in the experiment that effectively turned up the temperature, affecting the behavior of qubits. “One should have a little more respect with the truth.”

Quantum computing proposes to solve problems using properties of quantum physics that differ from the classical understanding of matter. In quantum physics, subatomic particles can inhabit a range of states, even at the same time, and appear to affect one another over great distances – even, it is posited, across different universes.

The kind of computing D-Wave pursues seeks to define a problem’s answer in terms of an optimal outcome among a near-infinitude of possibilities. This is analogous to the way a plant uses quantum processes to efficiently harvest sunlight for carbohydrates in photosynthesis

Mr. Vazirani seemed more charitable to D-Wave than in the past. In January, he and others published a paper of their own that indicated D-Wave had not cracked quantum computing. Since then, he said, “after talking with them I feel a lot better about them. They are working hard to prove quantum computing.”

In a paper also published on arXiv.org in January, scientists from D-Wave, U.S.C., and the University of British Columbia said they had found evidence in their machine of quantum entanglement, which is when one unit, or qubit, can affect another without direct contact.

“None of the classical models show what D-Wave hardware does,” said Mr. Williams.

While the controversy has gone on for years, it may reach an end within a year or two. Mr. Williams said that in April, D-Wave will be conducting experiments with a machine managing over 1,000 qubits, about twice the number currently inside its best machine.

A 2,000-qubit machine is scheduled for the end of the year, and will be ready for experiments within a few months after that. If D-Wave can rapidly solve the kind of large problems a machine like that is expected to, that would perhaps be the most persuasive evidence possible that we have entered a new computing era.